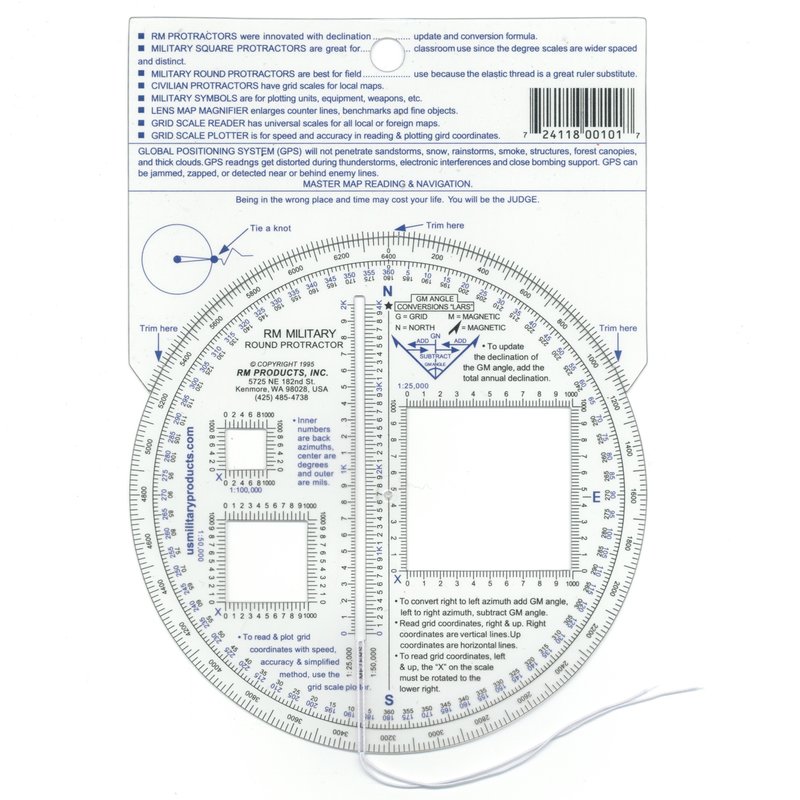 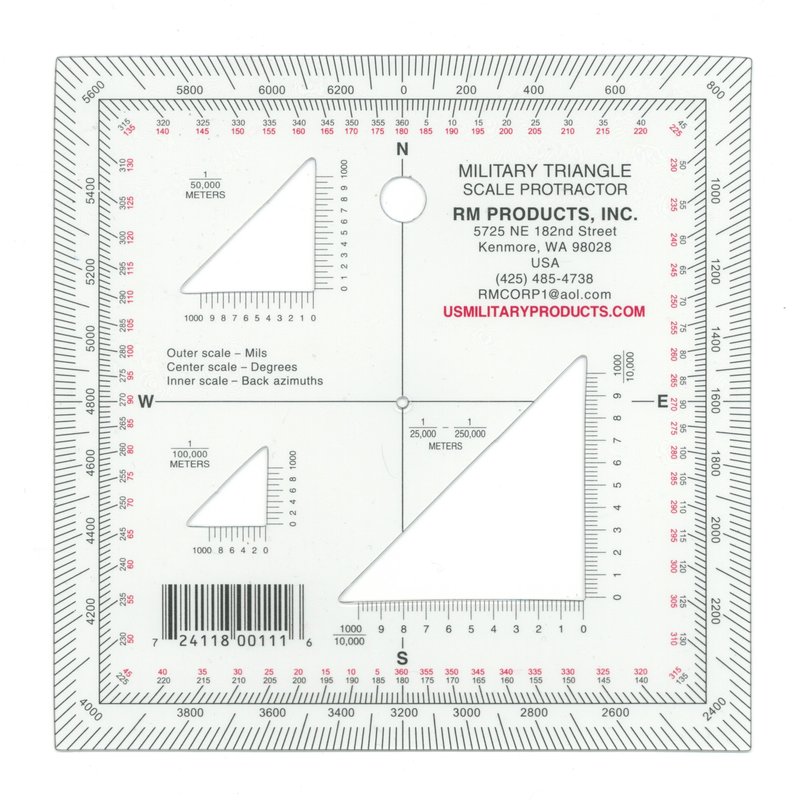 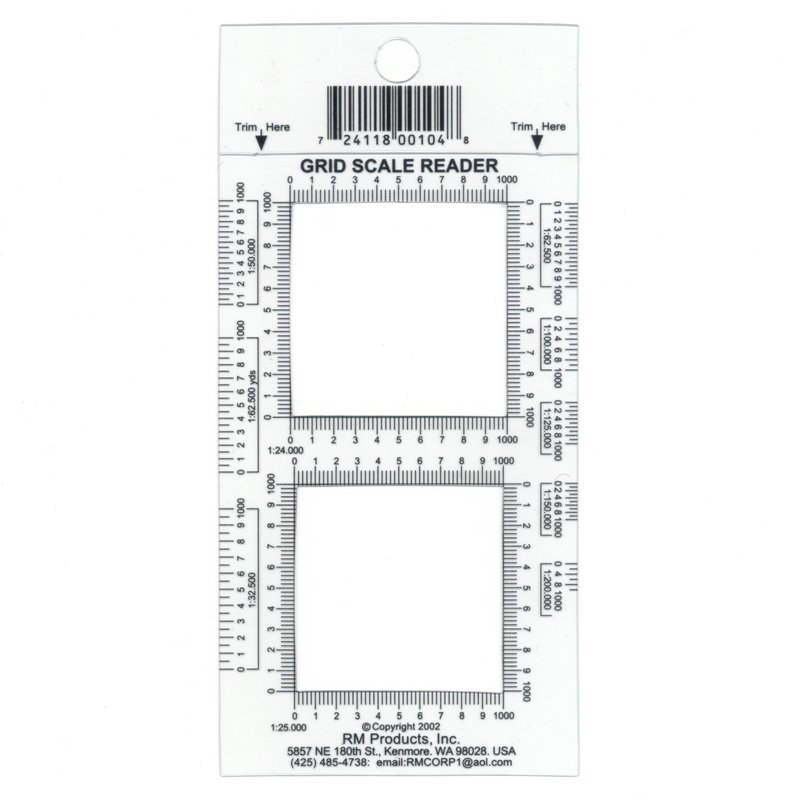 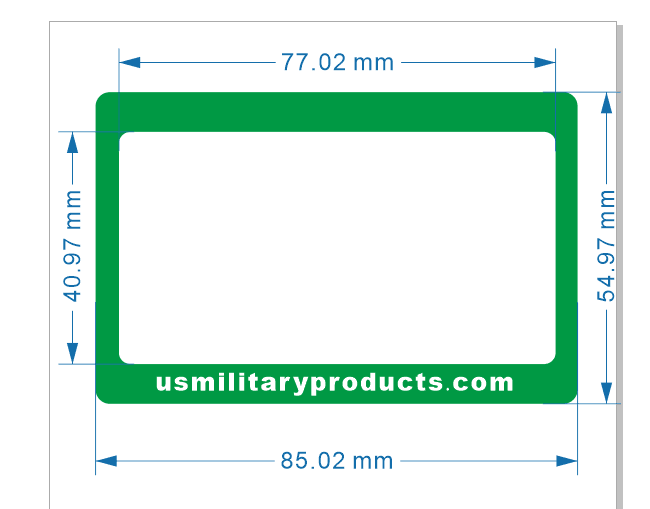 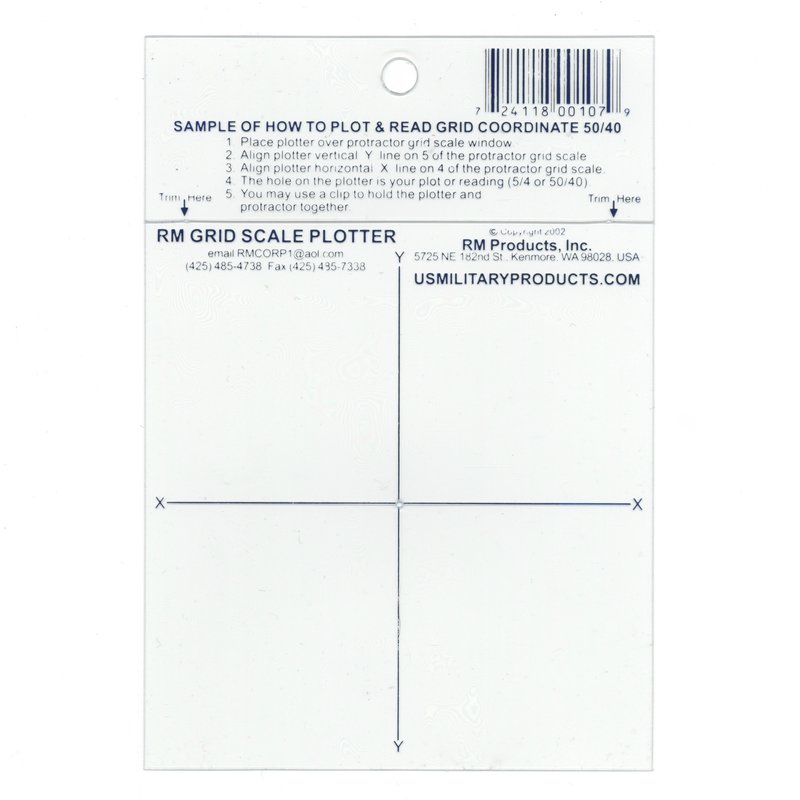 The current square issue map protractor (GTA 5-2-12) is cumbersome to use, resulting in added time in planning, and inherently inaccurate resulting in map errors that can cause units to get lost and rounds to fall on friendly forces. The round and improved square map protractors produced by retired U.S. Army SNCO, Rudy Madayag and offered in military clothing sales stores (MCSS) is far superior, easier to use and more accurate.

When measuring a grid angle from point A to point B on a map with the Army protractor, you are often forced to draw and extended line so you can reach the square's edge for a measurement! An improvement somewhat is to trim the mils scale off, but not a significant enough improvement. Often hand trimming of the mils edge results in a sloppy, uneven edge cutting off degree marks. You lose the mills scale for artillery calls for fire and still have to draw extended lines on your map, cluttering and obscuring important details. It takes a 1:50,000 scale map distance of 1,800 meters just to reach the protractor's square edge to get a reading.

Another self-help technique is to poke a hole in the center and place a knotted string in the center to overlap extend over your map lines for a reading, but this leaves a knot in the center, obscuring the center placement of the original point to be measured from and the string can fall out at the worst possible time. Two knots secures the string to the protractor center but creates a bulge so the protractor will not lay flat on your military topographic map. The RM protractor as can be seen in the picture here comes with an elastic string that is tied around the outside edge of the protractor for azimuth measuring. Even with a string, the square edge makes it necessary for angled tick marks to be the source of the reading; a round compass rose trying to be read off a square piece of plastic! If your azimuth lies in between the tick marks....Another field expedient is to take the straight edge of a sheet of paper, lay it along the two points to be measured and then lay the protractor on top in order to get a reading. Having dry sheets of paper for this edge is not reliable. Placing this string in the center or using the paper edge are not taught in basic enlisted or office training or in Army Field Manuals, either-so several generations of Soldiers are now using bad protractors and are mostly unaware of any techniques to improve their plotting; is it a wonder so many Soldiers dred land navigation and express little confidence in their skills?

The Army issue square protractor has meter marks from right to left so you need only slide the protractor flush from the right to get a reading of map grid coordinates. The RM protractor has meter lines from left to right for beginning land navigation students to visualize a simulated inner set of grids lines, but by turning the readers sideways, become a right-to-left grid reader in the same manner as the issue protractor does. A technique to improve either of the protractor's grid readers is to get some oil based model paint in white, yellow or orange and UNDERNEATH the grid reader scales paint a strip of color to make the numbers stand out. Another technique is to glue (use a clear glue that will not fuse the plastic) a piece of luminous tape (used to make "cat-eyes") underneath to make an opaque visibility strip under the grid reader lines.

While you can measure lines less than 1000 meters in map distance with your issue protractor's grid reader triangles, if the line is longer, its back to tick marks on a dry piece of paper (if this exists) with a pen (if you have one) to complile the total distance to compare it to the bar scale at the bottom of the map (if you haven't removed it to compact the map for laminating and easy field carry). If you don't have these items you are SOL.

The RM protractor, on the other hand has a long center distance bar scale for direct measurement. If you have straight distances longer than 1000 map meters you can measure them quickly. If you have a curved or erratic course along a road you will still need to do the tick-mark method, but not for most azimuths for x-country travel.

The RM protractor has an added feature; a brilliant graphic representation of the "LARS" rule that should be printed on every Defense Mapping Agency military topographical map. The "LARS" rule has always been a difficult concept for some Soldiers to master, and RM's graphic encapsulates simply and makes it easy to understand. The square issue protractor doesn't have this guidance; one needs to constantly refer back to the map sheet for reinforcement if the rule is not fully understood.

All is not flawless with the RM protractor, old 1991 versions are still on the shelves at some MCSS like the one here at Fort Bragg--the old version has wrong information on converting magnetic & grid azimuths that will confuse you greatly. If the RM protractor has any G-M angle conversion formula other than "LARS" its an old version and should not be purchased. The new 1993 version (look near the copyright by the RM address) will be the correct one to buy.

The round RM protractor is clearly the better protractor and should be adopted as standard U.S. forces issue. Its superior accuracy and flexibility are vital for building land navigation confidence and skills. On the field of battle under stress, there must be as little potential for human errors as possible. The issue square protractor is inherently inaccurate and clumsy to use. The RM protractor is shaped in the correct circle to begin with and has the needed features to contribute to precision and understanding. Short of organizational issue, Soldiers should use Private Purchase Initiative (PPI) to obtain the superior RM protractor for $2 at on-post MCSS or at off-post surplus stores.

RM has an improved square protractor that is slightly better than the issue square protractor with rounded edges and the"LARS" rule schematic that is primarily a classroom tool for beginning land navigation students that is also worth considering.